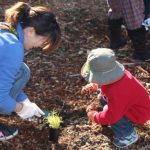 A Tree Planting Day was held at the Paddy Gray Reserve on Sunday 1st August 2010, to improve the habitat for Superb Fairy-wrens and help to keep them in Glebe.

The Central Sydney Planning Committee and the Council of the City of Sydney have agreed to zoning proposals for Harold Park. The outcome, confirmed at a meeting of full Council on Monday, 26 July 2010, was not all that we would have wished for, but far more favourable than might have been the case if proposals put forward by the current owner, the NSW Harness Racing Club, had been accepted. The next move will by up to the Club which can accept the City’s decision or ask the Minister for Planning to intervene on its behalf.   Read more »

A meeting sponsored by eight community groups from around the Inner-West bays precinct (Blackwattle, Rozelle, Johnston’s and and White Bays) has called on the State Government to ensure that future development of the precinct is integrated, sustainable and recognises community interests.  Read more »

Many of our members have renewed – have you?

A reminder: your membership of the Glebe Society for the financial year 2010/11 was due for renewal on 1 July.   Read more »

Harold Park goes to CSPC Thursday: YOU are needed!

The proposed draft planning controls for Harold Park will go before City of Sydney Planning Committee on Monday (July 19) and to the Central Sydney Planning Committee (CSPC) on Wednesday. There is a very real possibility that the controls will not be approved and that control of the planning for Harold Park will be referred to the Minister for Planning. This is an outcome we have been very keen to avoid as it effectively cuts the community out of the process. Members are encouraged to strongly express their views on the future development of Harold Park to both the City and the State Government, and preserve community input into the planning of this very important site.  Read more »

A selection of pictures taken at the Community Meeting to discuss planning for the Bays Precinct held at Wentowrth Park on 7 July 2010.  Read more »

More than a third of the Harold Park Paceway site in Glebe could become publicly accessible open space as part of draft planning controls developed by the City of Sydney.
Read more »