The President’s Page – The Glebe Society

The Glebe Society calls on the Government to reject this Bill. The proposed changes go far beyond the stated intent in relation to foreign donations, and will result in unintended consequences that stifle social advocacy and democratic debate.  Read more »

By Allan Hogan, August 20, 2017. It’s been a busy year for the Society, with many notable achievements, but we’re not sitting on our laurels, there are ongoing issues that require continuing attention.  Read more »

All members of the Society, and especially new members, are cordially invited to attend the Annual General Meeting of the Society at Glebe Town Hall, St Johns Rd Glebe on Sunday 20 August at 11am.  Read more » 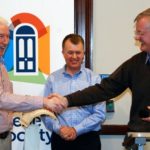 During the year, we have been treated to an extraordinary amount of ‘consultation’, particular by UrbanGrowth NSW in relation to the Bays Precinct. But the substance has been entirely lacking.
I take this opportunity of wishing everyone well for the coming year. May it not be so busy.  Read more »

Sydney City Council – Fit for the Future There was an extraordinary meeting of the Council on Thursday 18 June to consider the Council’s submission to the Independent Pricing and Regulatory Tribunal (IPART) concerning the NSW Government’s ‘Fit for the Future’ local government review process designed to reduce the number of Councils in NSW. Without […]  Read more »

Undoubtedly, the most significant matter this month has been the so-called Bays and Foreshores Experts Summit on 19 and 20 November. The development of this huge site is going to affect all of us and our families for the next 30 years at least, and it is important that the government gets it right by actually listening to the community.  Read more »

At this AGM I will argue that The Glebe Society faces challenges as great as when Askin chose Glebe as the site for a motorway. But The Glebe Society is now better prepared to turn them into opportunities. Today won’t be used for detailed recapping of what we have done during the year, for I […]  Read more »

Hon. Michael Baird, NSW Parliament, Macquarie Street, Sydney, NSW, 2000.   18 August, 2014 Dear Premier, The Glebe Society is a community organisation first formed in 1969 to protect Glebe’s heritage, environment and community from what is universally recognised now as short sighted plans to build a motorway through Glebe. This is of more than […]  Read more »